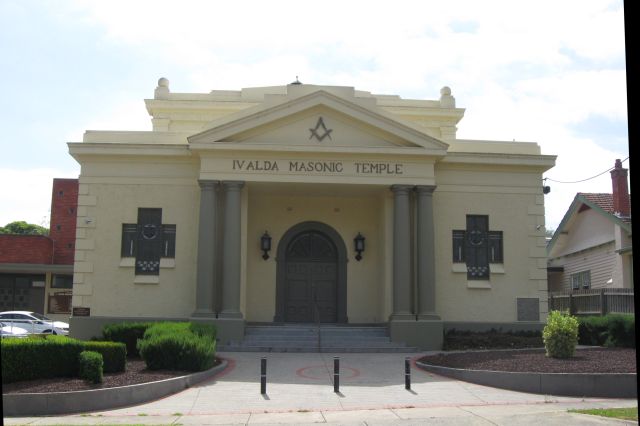 Ivalda? That’s a strange name! But not really, because the Masonic Centre in Salisbury Ave Ivanhoe, close to the Darebin station,was named for the three lodges that constructed it - IVanhoe, ALphington and DArebin. By coincidence, the order of the names follows the order of consecration of the three lodges, with Ivanhoe consecrated in 1914 and the Alphington and Darebin lodges consecrated in March and September 1922 respectively.

Prior to the construction of the Masonic Centre, the Ivanhoe and Darebin Lodges met in Ivanhoe Hall (the former HATCH gallery) in Ivanhoe Pde, and the Alphington Lodge met in St Jude’s Anglican Church Parish Hall in Lowther St Alphington (now private housing.

On 5th April 1923 representatives of the three lodges met and discussed the advisability of building a central Temple in the Heidelberg district. The land in Salisbury Ave was purchased soon after for 332 pounds. Honorary Architect Bro B. Dunstan Reynolds designed the Centre which the Chairman, Wor Bro. H. H. Olney insisted must have a dome. The appointed builder Wor Brother W H. J. Bailey built the Centre for 5,500 pounds. The first sod was turned in October 1923, the foundation stone laid in December 1923 and it was officially opened on 29th July 1924. The temple was dedicated on 29 May 1925.

All the timber furnishings, which still stand in the Centre today, were cut from a very large log of Australian Blackwood from Tasmania. The total cost of furnishings and fittings was 1,100 pounds, with many of the chairs, the canopy, and Revolving Pedestal donated by members or individual lodges. The Masonic Centre is used today by 25 different Lodge groups and two quilting groups.