We often hear today of industries ‘in transition’, but spare a thought for the carriage builders of the 19th century during the transition to the motor car in the early decades of the 20th century. Newnham and Son at 221-3 (later 478-82) Heidelberg Rd Fairfield made this transition during their 75 year history, going from horse-drawn carts to luxury coaches and delivery trucks.

The company was established in 1913 by Frederick Jnr. and William Newnham when they purchased an existing company, Fairfield Carriage Works. During WWI the company produced and repaired vehicles for the army and essential services, and at night their factory was used as the depot for the Men’s Section of the Fairfield Red Cross. Special woodworking machinery was installed in March 1916 for the manufacture of crutches, chairs and even Christmas hamper crates, bound for the front. 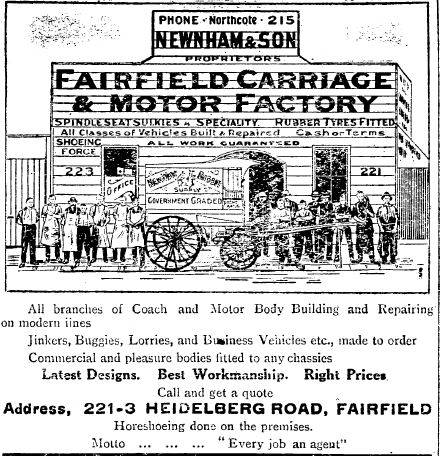 In July 1920 Newnham and Son began placing this advertisement on the front page of each edition of the Heidelberg News- often the only illustration! At that time they employed 16 men producing motor lorries and placing touring car bodies on Studebaker and Buick chassis in the motor section, and building jinkers, carts and buggies in the coachbuilding section. Reflecting the mixture of horse and motorcar traffic at the time, the firm had several departments including body building, smithing, horseshoeing, painting, trimming and wood machining. In July 1920 they had just completed an order for 14 vehicles- both horse and motor delivery wagons- for the New Way Rabbit Supply, completed in three and a half months.

The Heidelberg Road factory was completely rebuilt in 1953 and then years later, moved to Raglan St Preston, starting production in January 1964. In 1967 they began building passenger coaches and buses, which by 1988 made up 80% of their production. In some years they produced up to 75 buses and other vehicles.

In 1988 Newnham and Son was acquired by Custom Coaches Manufacturing Company and renamed ‘Newnham Custom’. It continued until 2001, when Custom Denning relocated to Adelaide.