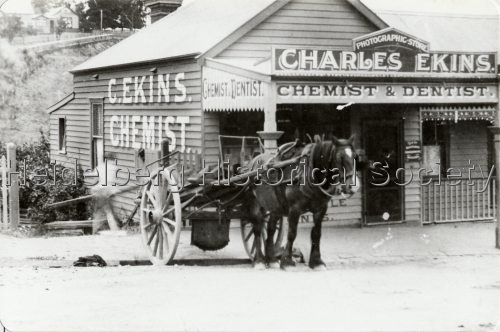 Here is Charles’ Ekins pharmacy in Burgundy Street, just opposite Mount Street (where the plumbing supplies shop is now located.) He became the proprietor in 1906, when he purchased the freehold from the previous pharmacist Mr Downes who, as well as being the local chemist, also had a keen interest in trotting.

Mr Charles Ekins and his wife came out to Australia in the ‘Torrens’ in 1881-2 and he practised as a pharmacist in Adelaide. He then came to Victoria and operated pharmacies at Woodend, Geelong and Ballarat. He moved to Melbourne, living first in East Malvern, then to Heidelberg in 1906, where he purchased the Burgundy Street pharmacy. It would have been a high-profile location at that time, as Mount Street was known as ‘Main Street’ and most of the traffic from Ivanhoe and Eaglemont would have passed his store.

He was described as a “first class chemist and an energetic man”. His daughters, Nina and Eva were accomplished musicians and they conducted piano and singing lessons from the residence beside the pharmacy, which was added in 1907.

This photograph must have been taken between 1906 and 1920, when he retired and turned the pharmacy over to Mr D. Shaw. It’s not clear whether there was a dedicated dentist practising from the pharmacy, or whether it was Mr Ekins himself who brandished the instruments!