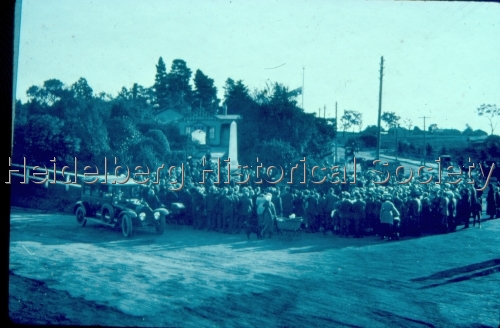 On 20 June 1921 the Heidelberg War Memorial, on the corner of Studley Rd and Burgundy Street was unveiled by the Victorian Governor, the Earl of Stradbroke. It was located in the gardens of the Civic Offices (that have since been relocated to the Banyule Flats). More than 200 pounds was raised by donation and fundraising efforts by the local community to pay for the memorial.

The memorial, constructed from Harcourt Granite and standing 16 ft. high had the 29 names of “the men who fell in the Great War” engraved upon it. Interestingly, one of those names was of the famous airman Cedric Howell, D.S.O., M.C., D.F.C., who did not die in the War but instead died during the England to Australia Air Race in December 1920.

The unveiling ceremony took place at 3.00 p.m. on a Monday afternoon. School children, accompanied by an orchestra, opened the proceedings by singing the National Anthem. All the surrounding shops were closed to mark the occasion. After a number of speeches, the ceremony closed with two verses of Kipling’s Recessional, sung by the school children.