For the moment, with social distancing, we can only have 3 people and 1 volunteer in the Research Room and a maximum of 10 people in the Exhibition space.

For Research Room users we strongly recommend that to guarantee a seat that you book by email at heidelberg.historical.society@gmail.com. This applies to our members as well as to the public.

Face masks are required to be worn inside the Museum if currently required by Victorian Government regulation. Please bring one with you. You will also be required to leave your name and phone number by using the QR code at the Museum, or filling in a registration form. 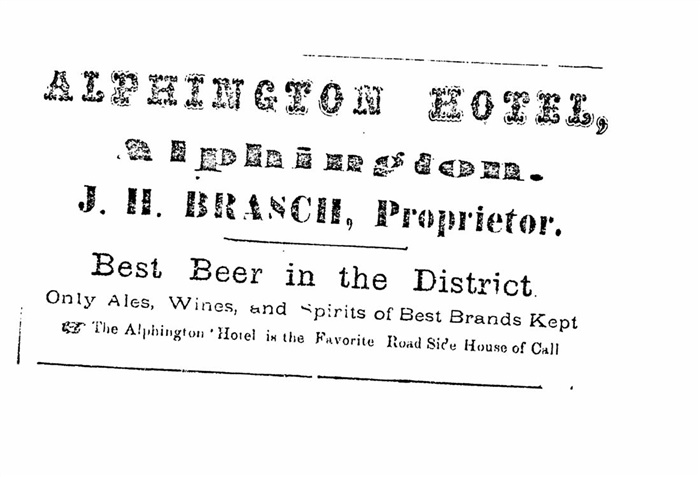 Advertising itself in 1903 as “the Favourite Road Side House of Call”, the Alphington Hotel stood on the site of the current Dan Murphy’s from 1861 to c.1985.

When you rush along Heidelberg Road today, it’s easy to overlook that there was a little cluster of development on the southern (city) side of Darebin Creek bridge, with 2 pubs, a church and shops.

This picture taken after 1916 shows the Alphington Hotel on the left hand side, with the Alphington Methodist church beside it. I wonder how the Methodists felt about their neighbours, given that they were there first from 1856, building the bluestone church in 1859?

Further down Heidelberg Road can be seen the Tower Hotel, built in 1891, replacing the earlier Half-Way Hotel on the site.

Even though women didn’t venture into the public bar of a pub (staying instead in the Ladies Lounge), it was quite common to have a female publican. In fact, in the late 1800s and early 20th century, over 50% of publicans were women. Not only did they have more authority over male drinkers, but until the 1960s publicans were required to live on site, making the pub a family home for the publican and his/her family. If you’re interested in learning more about female publicans, listen to this Radio National segment from October 2014Pouring a beer and dishing out advice

Of the 26 known publicans of the Alphington Hotel, at least ten were women, with Abigail Foulkes holding the licence for 28 years between 1874 and 1902. Between 1910-1929 there were seven female publicans, including Ellen Ryan (of Ryans Hotel in Ivanhoe).

In the mid 1960s, Ted Overs took up the licence and began purchasing surrounding properties. By 1971 the pub, which had previously only had two small bars and a small lounge had expanded dramatically. It had a large drive-in bottleshop, an expanded lounge capable of seating 180 people, car parking for 240 patrons and a TV and sports bar.

In 1985 the property was purchased by Dan Murphy, and the 124 year old Alphington Hotel was demolished to create the large liquor store standing there today.

Images: Darebin Heritage. Check out their webpage where there’s another terrific picture of the Alphington Hotel - http://heritage.darebinlibraries.vic.gov.au/article/680