The Museum is opening on Sunday 29th November, Sunday 6th December, and Sunday 13th December 2020. It will be closed for the remainder of 2020, until February 2021.

With social distancing, we can only have 2 people and 1 volunteer in the Research Room and up to 4 people in the Exhibition space during each time slot between 2pm and 3:15pm and 3:30pm and 4:45pm.

Book your timeslot by email only at heidelberg.historical.society@gmail.com. This applies to our members as well as to the public.

Face masks are required to be worn inside the Museum. You will be required to leave your name and phone number as per Victorian Government regulation. 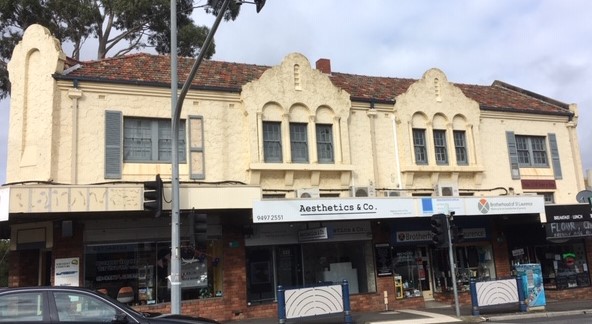 Ever wondered about this building as you’ve been making your way through the Ivanhoe Shopping Centre? On the corner of Upper Heidelberg Road and Ivanhoe Parade, number 218-224 is an example of the Spanish Mission style of architecture that became popular in Australia in the 1920s and 1930s. Although there are many residential examples of this style in Ivanhoe and Heidelberg, this is a rare example of its commercial use. The style is characterised by textured render, reddish Marseilles-pattern roof tiles, window boxes, timber shutters and arched gables. Although considerably altered on the lower level, the upper level remains much as it was built in 1932-33.

Eiseman was a very active figure in local community life. He helped establish the Ivanhoe Dramatic Club (1910) and was also a founding member of the Ivanhoe Bowling Club (1912). With “Skipper” Wilson he organised a public subscription to buy Yarra River frontage land as public open space which was then donated to the Heidelberg Council (1924). He and Cr Nellie Ibbott failed in their 1937 bid to establish a public swimming pool, however he did get the children’s library started in a room beneath the Town Hall.