Horsing around behind the Sir Henry Barkly Hotel

Sometimes what went on at the back of the hotel was as important as what was happening in the bar! This is a photograph of the stables at the back of the Sir Henry Barkly Hotel. With our reliance on cars today, it’s easy to forget that hotels played an important role in providing stabling for horses as well.

These are probably the stables that were attached to the original, single storey Sir Henry Barkly hotel. In 1878 the licencee William Cassidy advertised that the coaches for Melbourne and the surrounding districts changed horses at the Henry Barkly,and that the stables were under the care of a first-class groom. Although we don’t have a firm date, this photo dates from after 1888, when the original hotel was rebuilt as the double-storey hotel that stands today. It was quite common to leave the outbuildings and stables intact.

In 1899 Messrs. W. A. Wilson and Co were awarded the contract for Her Majesty’s Mails to and from Heidelberg to Diamond Creek, Warrandyte, etc. Their passenger depot was located at the Sir Henry Barkly Hotel. His new coaches were “strongly built, light-running vehicles, commodious and constructed on the latest principles.” 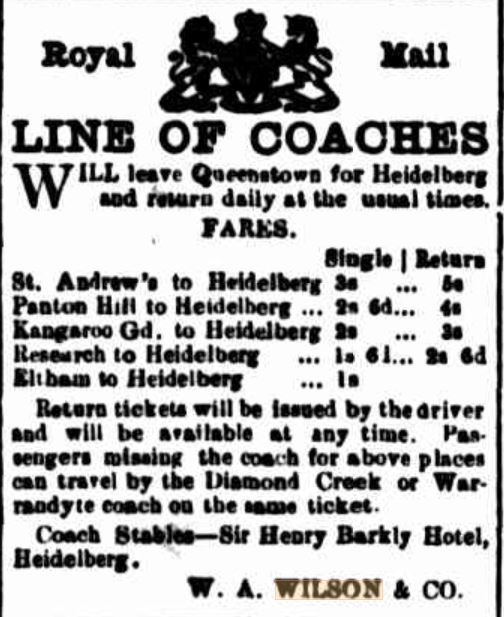 On 16 April 1902 a “mysterious” fire occurred at 1.00 a.m. in the outbuildings where the coaches were kept. At first suspicion was directed at swagmen, who may have been sleeping in the coaches. The fire appeared to be deliberately lit as four of the coaches were burning before the building itself ignited. Six coaches and traps were destroyed, all belonging to Mr Wilson.

The fire brigade, which was located across the road from Heidelberg Primary School in Cape Street, arrived expeditiously but their hose couplings were jammed and no water was available for a quarter of an hour. The firemen later alleged that they had been hindered by the public, who uncoupled the hoses. Many pigeons in the loft over the storehouse were killed, and the flames were just taking hold of the stables, in which there were seven horses, when the water came through. The horses, which were screaming loudly in fright, were all rescued.

Mr Wilson received 150 pounds from his insurance company for the loss, while Mr Dawson, the publican, received 27 pounds for the destruction of the outbuildings.

Our hotels today may have bottle shops attached, but back in the late 19th and early 20th century, stables for the horses were much more important!